by  Samuel Tadros The Atlantic

Last week’s ISIS bombing of a Coptic cathedral in Cairo, which killed 25, may “remind the world of the plight of Copts,” writes Samuel Tadros in The Atlantic, but “it is their daily encounter with discrimination and persecution that poses the greatest threat to their future.”

Fact is, “a Copt has never been an equal Egyptian citizen in the eyes of the law. Egyptian laws are, in fact, designed to remind him of his second-class nature.” Could the world’s oldest Christian community “actually become extinct?

Throughout the Middle East, the answer seems to be yes.” ISIS’ “reign of horrors has not only sought to annihilate [such] communities, but the very physical evidence of their historical presence.” So those who can afford to are emigrating, and “writing a new chapter of revival.”

This gruesome photograph became pivotal anti-war propaganda that drastically shaped public opinion. The horrific frozen frame depicts a baptismal moment of unwavering distinction, a moment in a time that could not be undone, an elevated wartime tension that could not be unraveled. In this sense, the photograph was successful. It was shocking and characteristic in its ability to drive the anti war movement, protesting against brutality of the Vietnam conflict. But, what you can’t see, is enough to change your perspective completely.

The common adage, “a photo is worth a thousand words,” is true. You’ve heard it, as a photographer you live by it, you incorporate it into your work mantra. But what happens when the story a photo tells is different from reality? The image, “Saigon Execution” is an example of this misrepresented story.

This iconic war photo was immediately popularized and used as valuable anti-war propaganda to depict the horrors of war. “Saigon Execution” clearly illustrates a violent moment frozen in time, but the context behind the image is not what it seems. The iconic image won Associated Press photographer, Eddie Adams, a Pulitzer Prize in 1969 for Spot News Photography. The image depicts the execution of Viet Cong prisoner, Nguyễn Văn Lém. With a caption of merely “General Nguyen Ngoc Loan executing a Viet Cong prisoner in Saigon,” the scene seems to depict the ruthless execution of a civilian, on a whim, in the streets of Saigon. Greater than an image, is the context. Context is the single driving force of truth past the immediate surface elements of a photograph. 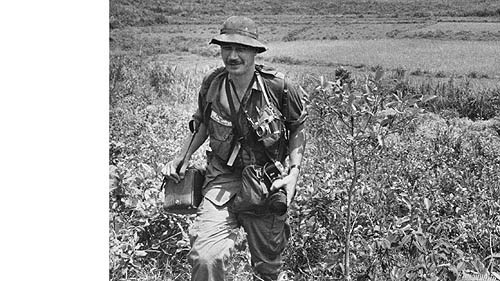 Despite assumable context, the “victim” in the photo, is not a civilian. The man being executed is Viet Cong prisoner Nguyễn Văn Lém (also known as Captain Bay Lop). Van Lem, or Bay Lop, was an assassin, the leader of a VC death squad who was targeting South Vietnamese officials. Early on the morning of the photograph, Bay Lop had led a unit of VC tanks to attack the Armor Camp in Go Vap. After taking control of the camp, Bay Lop arrested Lt.Col Tuan along with his family. In an effort to gain intelligence from Tuan, Bay Lop tortured, and eventually executed, Tuan. Bay Lop then went on to kill all the members of Tuan’s family, to include his 80-year-old mother. Captain Bay Lop was then captured near a mass grave of 34 innocent civilian bodies, leaving little doubt to his involvement in the atrocity. Upon proudly admitting his participation in the horrific war crime, Bay Lop was brought in and promptly executed with the .38 side arm in front of AP photographer Eddie Adams. 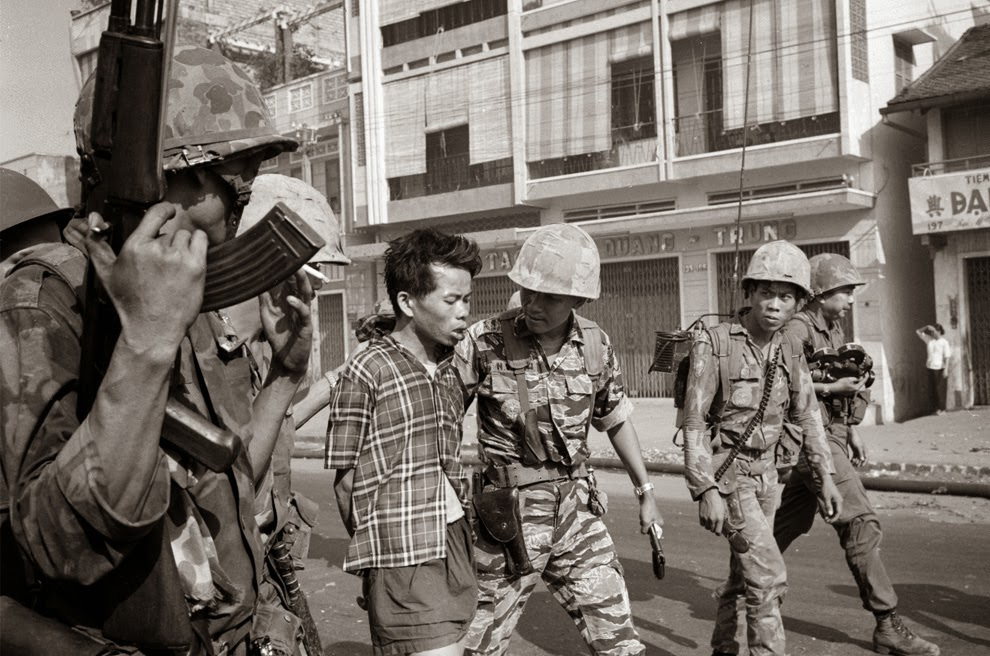 I just followed the three of them as they walked towards us, making an occasional picture. When they were close – maybe five feet away – the soldiers stopped and backed away. I saw a man walk into my camera viewfinder from the left. He took a pistol out of his holster and raised it. I had no idea he would shoot. It was common to hold a pistol to the head of prisoners during questioning. So I prepared to make that picture – the threat, the interrogation. But it didn’t happen. The man just pulled a pistol out of his holster, raised it to the VC’s head and shot him in the temple. I made a picture at the same time…

Adams later commented on his regret of the image. It was immediately adopted to depict ruthless violence and incivility of the South Vietnamese; however, the image, is absolutely contrary. While war is violent and horrific, the actions carried out by Gen. Nguyen Ngoc Loan, chief of the national police, were reasonably just. Adams later said in an article in Time, “The general killed the Viet Cong; I killed the general with my camera.”

Still photographs are the most powerful weapon in the world. People believe them, but photographs do lie, even without manipulation. They are only half-truths. What the photograph didn’t say was, What would you do if you were the general at that time and place on that hot day, and you caught the so-called bad guy after he blew away one, two, or three American soldiers? 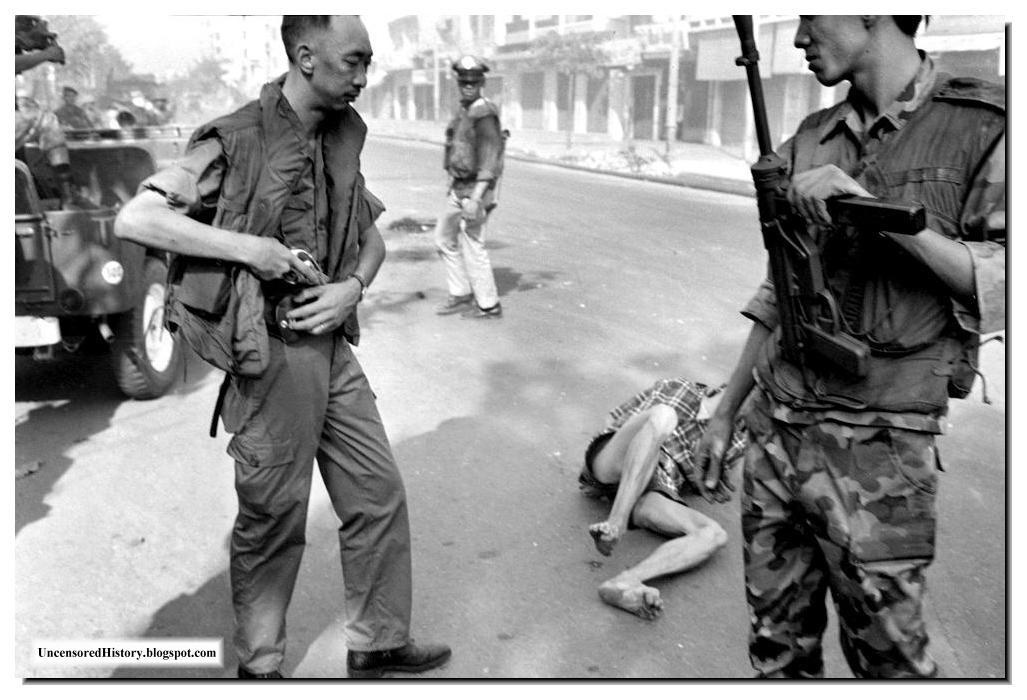 Adams continues to explain his remorse for how the image impacted Loan and his family. When Loan died of cancer in his Virginia home, Adams stated, “The guy was a hero. American should be crying. I just hate to see him go this way, without people knowing anything about him.”

Following the incident, General Nguyen Loan was injured by machine gun fire leading to the amputation of his leg. Seriously injured and crippled by war, Loan left South Vietnam. During the fall of Saigon in 1975, Loan fled to the United States. Putting the plights of war behind him, starting a new life, Loan opened a pizzeria outside of Washington D.C. In Rolling Valley Mall in Burke, Virginia suburbia, Loan worked until his retirement in 1991 having never fully escape the reputation of Adam’s photograph. Adams recalls a bit of bathroom graffiti on one of his last visits to Loan’s pizzeria, “we know who you are f****r,” a clear message of a misinformed individual. 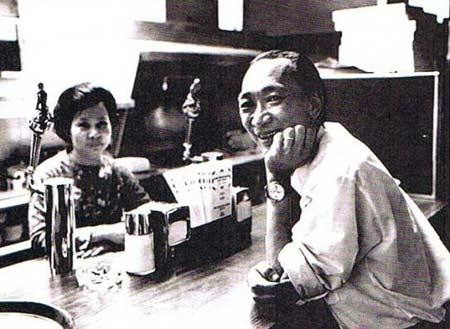 Loan and his wife at their Pizzeria in Burke, VA

The power of an image can shape minds, change lives and alter political climates. The brutality of war is depicted no matter the context of “Saigon Execution.” But if the proper story was represented, would the image have had the impact it did? The story should continue beyond the grainy black and white exposure. According to Adams, photographs are half truths. With only half of the story publicly revealed, there grows an element of moral ambiguity in its propaganda. We continue to see this misuse of media today in the social realm. We continue to see groups use imagery at face value to represent a cause. As consumers, we immediately take, share, like, and promote the media to support our agendas. Maybe, a taking pause could help us learn more about the way the world works. Perhaps a little more research and understanding of the whole story might shape our opinions of the situation completely.

The shame of France continues. This George Will op-ed will explain the outrageous act by the French court.

As the brother of a sister with mental retardation and a brother who is deaf, I am disgusted.

It is useful to describe departures from good manners or other social norms, such as wearing white after Labor Day or using the salad fork with the entree. But the adjective has become a splatter of verbal fudge, a weasel word falsely suggesting measured seriousness. Its misty imprecision does not disguise, it advertises, the user’s moral obtuseness.

A French court has demonstrated how “inappropriate” can be an all-purpose device of intellectual evasion and moral cowardice. The court said it is inappropriate to do something that might disturb people who killed their unborn babies for reasons that were, shall we say, inappropriate.

Prenatal genetic testing enables pregnant women to be apprised of a variety of problems with their unborn babies, including Down syndrome. It is a congenital condition resulting from a chromosomal defect that causes varying degrees of mental disability and some physical abnormalities, such as low muscle tone, small stature, flatness of the back of the head and an upward slant to the eyes. Within living memory, Down syndrome people were called Mongoloids.

Now they are included in the category called “special needs” people. What they most need is nothing special. It is for people to understand their aptitudes, and to therefore quit killing them in utero.

In 2014, in conjunction with World Down Syndrome Day (March 21), the Global Down Syndrome Foundation prepared a two-minute video titled “Dear Future Mom” to assuage the anxieties of pregnant women who have learned that they are carrying a Down syndrome baby.

More than 7 million people have seen the video online in which one such woman says, “I’m scared: what kind of life will my child have?” Down syndrome children from many nations tell the woman that her child will hug, speak, go to school, tell you he loves you and “can be happy, just like I am — and you’ll be happy, too.”

The French state is not happy about this. The court has ruled that the video is — wait for it — “inappropriate” for French television. The court upheld a ruling in which the French Broadcasting Council banned the video as a commercial. The court said the video’s depiction of happy Down syndrome children is “likely to disturb the conscience of women who had lawfully made different personal life choices.”

So, what happens on campuses does not stay on campuses. There, in many nations, sensitivity bureaucracies have been enforcing the relatively new entitlement to be shielded from whatever might disturb, even inappropriate jokes.

And now this rapidly metastasizing right has come to this: A video that accurately communicates a truthful proposition — that Down syndrome people can be happy and give happiness — should be suppressed because some people might become ambivalent, or morally queasy, about having chosen to extinguish such lives because…

This is why the video giving facts about Down syndrome people is so subversive of the flaccid consensus among those who say aborting a baby is of no more moral significance than removing a tumor from a stomach. Pictures persuade.

Today’s improved prenatal sonograms make graphic the fact that the moving fingers and beating heart are not mere “fetal material.” They are a baby. Toymaker Fisher-Price, children’s apparel manufacturer OshKosh, McDonald’s and Target have featured Down syndrome children in ads that the French court would probably ban from television.

The court has said, in effect, that the lives of Down syndrome people — and by inescapable implication, the lives of many other disabled people — matter less than the serenity of people who have acted on one or more of three vicious principles: That the lives of the disabled are not worth living.

Or that the lives of the disabled are of negligible value next to the desire of parents to have a child who has no special, meaning inconvenient, needs.

Or that government should suppress the voices of Down syndrome children in order to guarantee other people’s right not to be disturbed by reminders that they have made lethal choices on the basis of one or both of the first two inappropriate principles.