Jenny Tonge, a British House of Lords lawmaker with a history of making anti-Semitic statements, suggested that the Pittsburgh synagogue  shooting was the fault of Israel’s policy toward Palestinians.

“Absolutely appalling and a criminal act, but does it ever occur to Bibi and the present Israeli government that it’s [sic] actions against Palestinians may be reigniting anti-Semitism?” wrote Tonge on Facebook Saturday. Bibi is the nickname of Israeli Prime Minister Benjamin Netanyahu.

Tonge’s text was about a URL to a Haaretz article about the shooting that day at the Tree of Life synagogue in Pennsylvania’s second-largest city.

At least 11 people were killed in the attack, which occurred as worshipers were celebrating a brit milah, or circumcision. The alleged gunman, a 46-year-old white male named Robert Bowers, shouted “All these Jews need to die,” according to reports.

Last year, Tonge, who was suspended from the Liberal Democrat party for anti-Israel rhetoric and later quit over the suspension, accused pro-Israel Jews of creating anti-Semitism in Britain by not criticizing the Jewish state.

David Collier, an activist and blogger who documents anti-Israel and anti-Semitic vitriol, wrote on Facebook and tweeted: “This is truly shameful. As the blood still stains the floor of the synagogue in Pittsburgh, Pennsylvania, a MEMBER OF THE HOUSE OF LORDS, tries to turn the blame onto Israel.” He added: “Baroness Jenny Tonge is an absolute disgrace.”

Anticipating criticism, Tonge also wrote in her original post about “Bibi”: “I suppose someone will say that it is anti-Semitic to say so?”

She later posted a quasi retraction, citing a post by Robert Cohen, a British blogger on Israel and the Palestinians.

“I bow to this great article by Robert Cohen and acknowledge that to think that the Israeli government’s persecution of the Palestinian people had anything to do with the actions of this gunman, may have been too hasty. We must wait for his trial and testimony to try to understand better this ‘white’ supremacy movement in the USA,” she wrote.

In the latest undercover Project Veritas video investigation, eight current and former Twitter employees are on camera explaining steps the social media giant is taking to censor political content that they don’t like.

A former Colorado district attorney — who has been retired since 2001 — is fighting a subpoena in a $750 million defamation lawsuit filed against CBS by JonBenét Ramsey’s brother.

The Daily Camera reported that a lawyer for former Boulder County District Attorney Alex Hunter — who was in office during the first four years of the Ramsey investigation — argued the subpoena is an “annoyance” that would interfere with the 81-year-old’s annual relocation to Hawaii, the Associated Press reported.

The lawsuit says CBS and its featured experts set out to conduct a “sham reinvestigation” of the murder with “the preconceived the story line” that Ramsey killed his sister and conspired with his parents to cover it up.

“The accusation that Burke Ramsey killed his sister was based on a compilation of lies, half-truths, manufactured information, and the intentional omission and avoidance of truthful information about the murder of JonBenét Ramsey,” the lawsuit says.

The CBS special looked into theories that Burke Ramsey possibly could have killed his sister — accusations he claimed were entirely false. He was 9 at the time of JonBenet’s death.

Lawyers for CBS are seeking a deposition and documents from Hunter after Burke Ramsey sued in December 2016, saying his reputation was ruined after a television series suggested he killed his 6-year-old sister.

The beauty pageant star was found dead in the basement of her family’s home in Boulder in December 1996. A prosecutor cleared her parents and brother.

Kristen Bell, the voice of Anna in Disney’s hit animated film “Frozen,” revealed in an interview published Wednesday her concerns about the message “Snow White” sends to her two daughters.

Bell told Parents magazine that she asks her daughters, “Don’t you think that it’s weird that the prince kisses Snow White without her permission? Because you cannot kiss someone if they’re sleeping!” she said.

The 38-year-old actress appeared to worry about the message of consent, particularly what it means for her young girls Lincoln, 5, and Delta, 3.

Bell, who reads to her daughters every night, also expressed concerns about the part when Snow White eats an apple from the witch — a stranger.

“Everytime we close Snow White I look at my girls and ask ‘Don’t you think it’s weird that Snow White didn’t ask the old witch why she needed to eat the apple? Or where she got the apple?’ I say, ‘I would never take food from a stranger, would you?’ And my kids are like, ‘No!’ And I’m like, ‘OK, I’m doing something right,'” she told the magazine.

In the 1938 Disney film, Snow White falls into deathless sleep after eating a poison apple from a jealous witch, until a prince wakes her with true love’s kiss.

“Because she waits around for a rich guy to rescue her. Don’t. Rescue yourself, obviously,” Knightley said.

The 33-year-old actress said “Little Mermaid” is also banned, even though she loves the film.

“I mean, the songs are great, but do not give your voice up for a man. Hello,” she said.

But she said “Finding Dory” is a “big favorite,” and “Frozen is huge, Moana is totally fine.”

Knightley was also promoting her upcoming Disney film “The Nutcracker and the Four Realms” on the show.

via DISGRACEFUL! Antifa To 9/11 Widow: ‘Your Husband Should F–king Rot In The Grave’

An Antifa protester, verbally accosted a woman during protests over the weekend in Portland, Oregon, telling her that her deceased husband should “rot in the grave.”

“Why are you trying to block me?” the man yells at the woman. “I’m f–king trying to walk here.”

“Because I obey traffic signals,” the woman responded.

“I’m not married,” the woman answered.

“I’m not like your boyfriend or your cop boyfriend who is going to f–king knock you out, so don’t worry,” the man said.

The woman turned around and pointed at her NYPD hat, saying, “My husband died on 9/11.”

“Good for him,” the man responded. “Good, good. NYPD was a bunch of sodomizers, f–king sodomizing immigrants with their bully sticks.”

“So yeah, your husband, should probably f–king rot in the grave.” 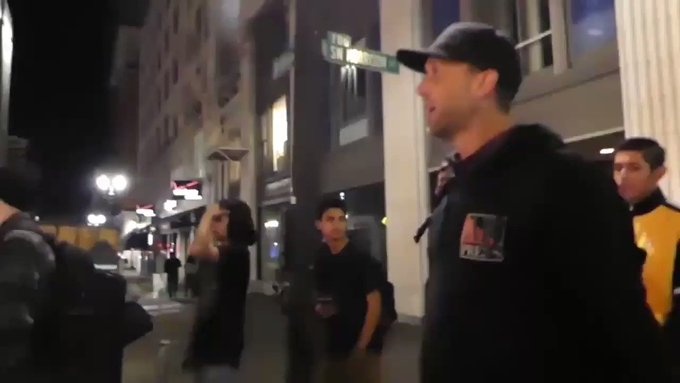 Cruz, of course, is the outspoken San Juan mayor who appeared regularly on television during and after Hurricane Maria last year, blaming the Trump administration for failing to address the situation in Puerto Rico. Cruz even donned a “Nasty Woman” shirt in one interview.

But, as administration officials have pointed out, many of the problems rescuers faced were the result of local failures, including a lack of infrastructure, government favoritism, and rampant corruption. Cruz and others are alleged to have hampered, and occasionally blocked, the distribution of much-needed supplies to Puerto Ricans without food, water, medicine, or electricity.

And now, it seems, the FBI is trying to get to the bottom of exactly what’s going on in San Juan.

NBC News reports that “FBI agents were seen raiding an office on the 15th and 14th floor of Torre Municipal de San Juan, according to authorities. The operation was related to suspected corruption in the purchasing department.”

“We are seeking documents and evidence that support this allegation,” an FBI spokesman told reporters, according to NBC. “This search will help us confirm if allegations are true or not. We will look through every document, bill, email … anything that will let us clarify the claims.”

Cruz commented on the raid on Twitter, pledging her “total collaboration” with the FBI’s investigation: “If someone has done something wrong, they should be subjected to due process and face the consequences of their actions.”

That might include Cruz. Fox News reports that the FBI’s investigation centers around whether Cruz and allies in the San Juan city government handed city business — and city money — to preferred companies, many of whom allegedly charged the city thousands more than other suppliers.

Cruz’s former director of procurement, Yadira Molina, apparently blew the whistle on her own offices — and her boss, Mayor Cruz — last February reporting ““alleged irregular acts” to a local comptroller. Molina told officials that “a supply company was granted ‘preferred supplier’ status which paid them more than three times what regular suppliers made,” and that Cruz may have been responsible for inking the deal.

Varlam Shalamov was a brilliant writer who was sentenced in 1937 to years of hard labor in a Soviet gulag. If that were not painful enough, though he was eventually freed, his writings were more or less lost to history until today—his book, Kolyma Tales, is finally enjoying a well-deserved resurgence. In a piece published by the Paris Review, Shalamov lists things he learned in the Gulag:

“I discovered that the world should be divided not into good and bad people but into cowards and non-cowards. Ninety-five percent of cowards are capable of the vilest things, lethal things, at the mildest threat.”

via Travel Resources for Professionals, Students and Civilians